Photo credit: AFP Photo
For much of 2022 to date, the global themes of rising inflation and the repricing of DM rate hike cycles have been the dominant drivers of Asia rates. The onset of the Russia-Ukraine military conflict means that the outlook for Asia rates will become more complex ahead. Related geopolitical risks could rise to become as important a driver of Asia rates as the upcoming Fed hike and QT cycle. Also, we have to consider the possible extreme scenarios (such as the military confrontation broadening to more countries) and the expected impact on our Asia rates outlook.

For Asia rates and bonds, we see three main impact channels from the Russia-Ukraine conflict. The first is via global core rates. In the near term, the uncertainty and associated risk aversion are likely to mean that hawkish upward repricing of Fed and DM rate hikes would take a pause or slightly unwind. The upside to long-term US Treasuries and Bund yields should also be capped due to haven demand. As a result, we think that lower-yielding Asia rates (Korea, Singapore) would benefit by being biased lower alongside core rates. In contrast, higher-yielding Asia rates (Indonesia, Philippines, India) would be biased higher due to more significant widening risk premiums. For the mid-yielding markets, we expect Malaysia rates to be relatively less sensitive to core rates and China rates to be predominantly driven by domestic policy and drivers.

The second channel of impact is via higher commodity prices, particularly oil. With most of the region being net oil importers (except Malaysia), sustained periods of elevated oil prices would weaken trade and current account balances, and by extension, weigh on total returns of Asia bonds. For a more in-depth discussion of Asian economies' exposures to energy prices and the impact on Asia rates, please refer to Asia Rates: Impact from rising energy prices. Based on the joint assessment of the current strength of both oil trade balances and overall current account balances, we think that India and Thailand rates and bonds would be most sensitive and would thus cheapen more against higher oil prices.

There would also be consequences for Asia's monetary policy outlook. Higher oil and commodity prices would be inflationary and growth-negative for Asian economies. Considering that the current stance of several Asia central banks already leans neutral-to-dovish, and inflation prints are rising across the region, we think the risks are skewed towards Asia central banks focusing on greater inflation risks and turning more hawkish. In our view, the likelihood of them focusing on negative growth drags and turning more dovish is low. We would be wary of the risks of hawkish policy turns by RBI, BI, BNM and BOT and the impact on respective rate hike pricings. 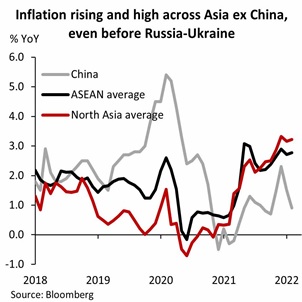 The third channel of impact is via swings in global risk sentiments. While Asia has little economic and financial exposure to Russia and Ukraine, heightened risk aversion could see bond investors cut risks by indiscriminately selling EM bonds or redeeming from bond funds tied to EM bond benchmarks. That said, there is some buffer against outflow risks as foreign positioning across most Asia bond markets has been low coming into 2022.

So far, risk sentiments still seem to be holding up. Still, we cannot discount the scenario where sentiments sharply deteriorate with more punitive sanctions or more countries entering the military conflict. A swift de-escalation appears unlikely, with geopolitical tensions likely to rise steadily in the near term. A prolonged period of heightened uncertainty around the likely endgame would drive higher risk aversion and greater risk premiums across Asia rates and bonds.

In the near term, for Asia bond investors, we think that Malaysia and China government bonds offer the best profile to ride out the Russia-Ukraine conflict. As the only Asian economy with positive oil and gas trade balances, Malaysia would marginally benefit from higher oil prices via higher terms of trade. Though foreign ownership of Malaysia MGS/MGII is high (~25%), a significant portion of foreign holdings is held by foreign central banks and foreign governments, which is expected to be more sticky and less susceptible to outflows around risk aversion. China bonds would provide some defensive cover in portfolios, as China's strong BOP profile seems to offer some safe-haven characteristics to China bonds.

We have a few ideas for investors to consider to hedge against a worsening of geopolitical risks around the Russia-Ukraine conflict and higher oil prices.

If US rates fall, they will likely follow. For SGD rates, there is a high level of passthrough from USD rates movements. There is a low likelihood that BOK’s outlook could become more hawkish for Korea.

INR rates are most sensitive to higher oil prices and thus a direct play on oil supply shocks (Russia could retaliate by curbing oil exports). Markets are unconvinced that INR rates can stay low on a dovish RBI.

Overweight MGS and CGB for reasons above. Underweight LB because Thailand has one of the largest oil trade deficits and BOT could turn less dovish due to higher inflation risks.

For our portfolio of Asia rates ideas, we are initiating and adding a receive 5Y USD IRS vs pay 5Y INR NDOIS. As mentioned above, INR rates are the most sensitive to oil prices. However, with RBI slow to turn hawkish and hike rates for growth reasons (thus anchoring 1Y, 2Y rates), higher oil prices would lead to more inflation risk premium around the 5Y. Beyond higher oil prices, there is also the record FY22/23 bond supply that is coming on in April. Expectations of GSec weakness and the resultant hedging activity could put disproportionately large upward pressures on 5Y INR OIS/NDOIS. We pair with a receive 5Y USD IRS to offset some of the high negative carry from paying INR rates and a slower pace of Fed hikes if geopolitics worsen. Looking at our current open ideas, we are comfortable not making any adjustments now.