FX: The Yen’s impact on the DEER strategy

We conduct an interim review of the DEER strategy’s performance, focusing on the JPY.
Chang Wei Liang30 Mar 2022

We conduct an interim review of the DEER strategy before the next round of scheduled recommendations, in light of elevated volatility across currency markets. Our February recommendations are to long JPY, GBP, and CAD, and short USD, CHF, and EUR (see FX: DEER recommendations (February 2022), 3 Feb 2022).  The individual constituents of our DEER strategy have seen varying returns as of 29 March 2022, shown in the table below:

Our EUR, CHF and CAD recommendations gave positive returns thus far. But the impact of sharp JPY loss (-7.7%) has outweighed the gains, dragging the overall DEER strategy’s interim return to around -1.3% for this quarter. We dive deeper into JPY dynamics to analyse return prospects for the overall DEER strategy. We identify key factors that are driving the JPY’s short-term underperformance, contrary to its attractive long-term DEER valuation.

JPY selloff is both extreme and broad-based

To start, we note that the current selloff in the JPY against the USD has been rather extreme. Month-to-date return of -7.3% for March can already rank as the largest loss since Nov 2016, following Trump’s election victory. Since 2000, there were only 4 other months with JPY losses that have exceeded this magnitude. Regarding volatility, the move this month has also exceeded 2.7 times standard deviation of monthly returns for USD/JPY.

To clarify, this JPY sell-off is also not predominantly driven by USD strength. Japan’s Nominal Effective Exchange Rate (NEER) has declined by a significant 5.6% in March, so the JPY has weakened sharply against currencies of its major trading partners too. A decline of such magnitude in the JPY NEER ranks among the top 5 worst monthly returns since 2000, which show how extreme and broad-based the current bout of JPY weakness is. 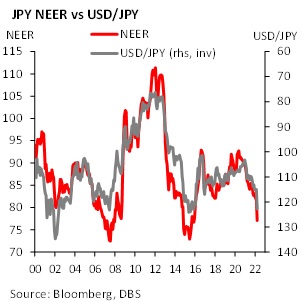 One reason why the JPY has underperformed is due to policy divergence. The Bank of Japan (BoJ) is not expected to start hiking rates in the near future, even as other major central banks such as the Fed and BoE had begun to raise rates. Furthermore, the BoJ remains committed to quantitative and qualitative easing (QQE), which could see it increasing asset purchases. This stands in contrast to the Fed and BoE, which are already looking to trim asset holdings, and the ECB, which is expected to end asset purchases by Q3.

Furthermore, the BoJ has implemented Yield Curve Control (YCC) policy, which sets a 25bps trading range around a 0% target of 10Y JGB. In theory, this helps to anchors rate expectations. In practice, it could spur a sudden expansion of asset purchases and additional stimulus when global inflation is rising, rather than stimulus withdrawal.

Global bond yields have risen sharply as the Fed turns hawkish, while inflation globally is also fanned by rising oil prices and supply chain issues. The side effect is that JGBs have turned relatively less attractive compared to other bonds, and this is triggering selling pressures in the JGB market.

Since last Friday, the JGB 10y yield has surged towards the upper end of the YCC range at 25bps. Responding forcefully to defend its YCC target, the BoJ has scheduled an unprecedented series of fixed-rate unlimited offers to buy 10Y JGBs on 28, 29, 30 and 31 March this week. The Bank has also made an unlimited offer in February, but the 10y yield was quelled without it having to make any purchases. This week, the BoJ has already bought JPY593bn of bonds by 29 March, and could buy even more in coming days. Such sudden asset purchases have added to JPY negativity.

In short, given sustained monetary policy divergence with major central banks, there has been a recent flurry of speculative shorts in the JPY to fund carry trades.

Despite BoJ’s dovish stance, it has become clear that the government is getting more uneasy with JPY weakness. There has been increased rhetoric over the JPY from Finance Minister Suzuki, Vice Minister of Finance Kanda, and Chief Cabinet Secretary Matsuno.

Both Suzuki and Kanda affirmed that sudden moves in FX are not desirable, and that the government will watch to ensure that a weak JPY poses no negative impact to the economy. Kanda had also held discussions on USD/JPY moves with the US Treasury, suggesting that US monitoring has also increased over the JPY. Matsuno added that he is watching FX markets with vigilance.

Such a barrage of jawboning suggests that further JPY depreciation from here may trigger stabilizing market intervention by the MoF. If so, it will be construed as a strong signal of limited tolerance for speculative JPY shorts.

Moreover, rates markets are also now questioning the sustainability of YCC. We note that the 10y JPY swap rate has risen towards 40bps while the JGB10y yield is at 25bps. Markets have not forgotten how quick the RBA was in abandoning its yield curve control policy in late Oct last year, after markets continuously tested its appetite to defend its AGB target yield. BoJ is likely to enter similar straits, and market pricing is now saying that risks of a policy tweak for YCC cannot be discounted.

Given these two factors, short-term risks for the JPY are shifting towards a more balanced position.

From a long-term valuation perspective, by various metrics such as the real effective exchange rate based on CPI or unit labour costs, the JPY is at is cheapest since 1990. While one may argue that some weakness is due to high oil prices that weigh on Japan’s trade balance, our DEER analysis has incorporated such negative terms of trade effects, and still find the JPY attractive.

From an economic fundamental perspective, while Japan’s economy is weak compared to the US, and its industries faces more competition from China and Korea, Japan is also not so weak that it needs a sharp depreciation similar to EM economies looking for a jolt to trade competitiveness. With the JPY being as weak as it is, Japanese exporters are in prime position to capture market share in industries that they are competitive in, such as autos, semiconductors, and machinery. This could allow a sustained improvement in the current account balance over time, which may be further bolstered after Japan reopens its borders for tourists, following the lead of other countries.

In conclusion, the DEER strategy is meant to do one thing and do it well: distilling long-term currency valuations and recommending positions accordingly. From this perspective, the DEER Strategy maintaining a long recommendation for the JPY is both consistent and on point, notwithstanding unfavourable short-term volatility due to rapid policy evolution. To offer additional diversification, we may recommend other strategies in future that capitalize on short-term features driving FX markets, including policy paths.