Weekly: Watch out for another market tantrum

A major point of divergence between the US Federal Reserve and global markets is opening up.
Taimur Baig, Samuel Tse23 Aug 2019

Market indicators keep flashing recession signals (with the widely followed 2Y-10Y treasury spread turning negative several times in recent weeks), but looking at real economic data from the US, there is little sign whatsoever. Through the month of August, Atlanta Fed’s Nowcast has steadily raised its estimate for 2Q GDP (starting the month at 2% and now tracking 2.2%). This has been driven by stronger-than-expected retail sales and residential investment data. Add to this the strong jobless claims report for the week ending August 17, fears of the ongoing trade war spilling over into the US economy have so far not materialised, especially with respect to consumption.

This sets up a major point of divergence between the Federal Reserve and global markets. Affected by progressive slowdown in China and EU, whiplashed by trade wars, concerned about various pockets of geopolitical flashpoints, and finally, alarmed by the sharp ongoing slowdown in the global auto and electronics sales, developed market bond yields have declined sharply and many central banks have started cutting rates. But as the far as the US is concerned, the Fed sees steady growth of GDP, wages, and jobs, stable financial markets, as well as moderate inflation. From that vantage point and given its mandate, Fed officials are increasingly struggling to live up to market expectations.

This week’s Fed-speak underscores this struggle amply. Four regional Fed presidents (George, Rosengren, Harker, and Kaplan) have spoken about the US economy not in need of immediate policy easing, in line with Chair Powell’s argument made in July that last month’s rate cut was nothing more than a mid-cycle adjustment, as opposed to the beginning of a rate cut cycle.

With the markets certain about a September rate cut, and the Fed sounding not certain at all, we are heading toward an episode when assets sell off sharply ahead of the September 17-18 FOMC meetings to force the Fed’s hand. Fasten your seatbelts.

What’s the best way to visualise the ongoing slowdown in Asia’s two largest economies? Below we present a set of high frequency indictors (normalised as z-scores) that are the best statistical proxies of China and India’s GDP. Indeed, these variables make up the core of our Nowcasting exercise. In addition to actual data, the charts also depict our model-based forecast for 3Q19 for the respective indicators.

These charts speak volumes. Compared to the exuberant days five years ago, both economies are characterised by across-the-board and historically weak growth momentum. 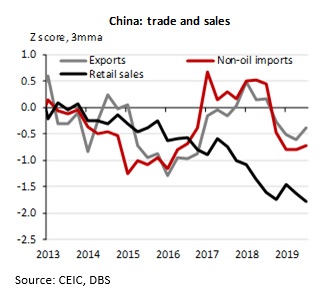