Asia interest rates markets are highly correlated through the sharing of several global and regional drivers. At the global level, factors such as Fed policy, US rates and the broad US Dollar are critical determinants. At the regional level, China's growth and demand trajectories, via the trade channel, can have a material impact on the growth and interest rates of other regional markets. Beyond common drivers and attributes, there is a fair amount of diversity (or idiosyncrasies) too, in terms of macro fundamentals and market characteristics.

Our objectives and PCA

In this report, we set out to distinguish global/regional ("systemic") from individual market ("idiosyncratic") factors and track their relative significance and impact in driving Asia interest rates. Our approach leverages on the Principal Component Analysis ("PCA") technique which is frequently used across the interest rates space. PCA's information-maximizing and dimension-reducing properties would be especially relevant and useful for our purposes and could also facilitate more insightful analysis.

Under most market environments and across most time periods, US interest rates should be expected to be the dominant driver of Asia interest rates. I.e. Variation in US rates should be able to explain a large portion of the variation in Asia rates. We believe that our approach can value-add in a few ways. One, identify Asia markets where the interest rates trajectory has diverged from US/regional trends, and examine idiosyncratic/local causes. Two, identify systemic factors beyond US rates that could be influential drivers of Asia rates, during certain time periods.

Our approach utilizes 26-weeks rolling windows to construct principal components ("PCs" or "latent factors") from a cross-sectional time-series of 5Y Asia swap rates (includes South Korea, Thailand, Malaysia, China, Philippines, India and Indonesia). By construction, each latent factor provides some unique information that is not provided by other latent factors. For Indonesia, because of liquidity reasons, we use bond yields instead of swap rates. We have excluded Singapore because Singapore rates track US rates to a large degree, a result of Singapore's open capital account and FX-based monetary policy.

We then compute R-squared measures to represent the degree of covariance/co-movement between 5Y Asia swap rates and our constructed PCs/latent factors (Table 1).

We first observe that the 1st PC/latent factor can explain a large portion (>50%) of variation in five out of seven Asia swap markets, and therefore, should be inferred to be systemic in nature. We can also assume that the 1st PC/latent factor, to a large degree, incorporates variation in US rates, judging by the high degree of co-movement between the two. Therefore, we conjecture that the rally in Thailand, Malaysia, Indonesia, Philippines and China interest rates have been predominantly driven by lower US rates. 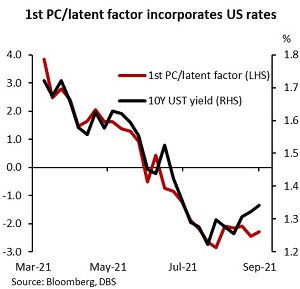 Our observations so far are consistent with our understanding of fundamentals and developments across the various Asia rates markets. We will however caveat on 5Y China swap rates - A R-squared measure of 71% (vs 1st PC/latent factor) likely overstates the impact of systemic forces (US rates). Reason being, it is generally well-known that China interest rates are primarily driven by local factors (e.g. China's growth and fiscal/monetary policies) and therefore relatively less influenced by US rates. The high R-squared (71%) is likely because weaker Chinese growth momentum and PBOC easing (RRR cut in July) have driven China swap rates lower, and timing-wise, this has coincided with lower US rates.

We also compile a list of global and regional macro and financial variables (around 200 and still expanding) and compute their co-variances/co-movements (again, with R-squared) against our PCs/latent factors (Table 2). Our goal is to pick out other systemic forces, beyond US interest rates, that could have had a significant impact on the trajectory of Asia interest rates. Equally important, we also hope to pick out variables that can help us gain some understanding of the 2nd and 3rd PCs/latent factors (which have driven the deviation of South Korea and India interest rates from US/regional trends). We acknowledge that correlation doesn't imply causation and would certainly sense-check any findings. 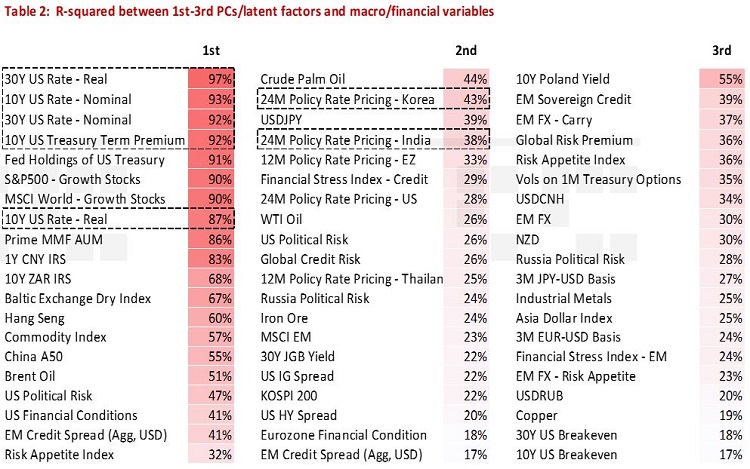 Looking at the 1st PC/latent factor, we observe that the R-squared measures are very high against many global macro and financial variables. This supports our earlier conjecture that the 1st PC/latent factor represents global systemic forces. We also observe that long-term (10Y, 30Y) US interest rates, specifically the real rates, are the most significant drivers of Asia rates over the last six months. Not shown in the table are US breakevens with R-squared measures of less than 15%, suggesting that US inflation pricing has little to no impact on Asia rates trajectory. The high degree of co-movement between Asia interest rates and US/global growth stocks (R-squared of 90%) is likely due to the common linkage to US real rates (lower US real rates tend to be supportive of growth stocks outperforming value stocks).

Moving onto the 2nd and 3rd PCs/latent factors, we observe that the R-squared measures against global macro and financial variables are much lower, suggesting that both these PCs/latent factors are less global in nature.

For the 2nd PC/latent factor, we are unable to identify any clear themes that run across the variables. Recall, the 2nd PC/latent factor can explain 57% of the variation in 5Y Korea rates and 66% of the variation in 5Y India rates, but less than 10% of the variation for other Asia rates. i.e. the 2nd PC/latent factor represents certain attributes that are shared by Korea and India rates only, and has little relevance for other Asia rates. We think that this "shared attributes" could revolve around the timing/pace of rate hike cycles, where Bank of Korea (BOK) and Reserve Bank of India (RBI) are expected to significantly lead the Fed and other Asia central banks. BOK had already done their first hike last month, and more hikes could be forthcoming to rein in financial stability risks relating to high household debt levels. With inflation continuing to print above-target and economic recovery taking hold, there are some market expectations for RBI to start raising the Reverse Repo policy rate at the December meeting. On the other hand, the Fed and other Asia central banks are not expected to achieve rate lift-off until late-2022/early-2023, at the earliest. Therefore, based on this line of reasoning, we think that the 2nd PC/latent factor essentially represents South Korea and India's rate hike expectations/pricings.

When we look at the 3rd PC/latent factor, a clear theme runs across the variables with high co-movement. And that is Emerging Markets risks and sentiments. Therefore, it is probably not surprising that the 3rd PC/latent factor can explain a non-negligible portion (15-20%) of the variations in 5Y Korea, Malaysia and India swap rates. These three rates markets tend to be relatively more sensitive to external risks - Korea through its economic leverage to global growth/trade cycles, Malaysia through high foreign bond ownership levels and India though its sensitivity to oil prices (impacts fiscal balance and domestic inflation). One notable omission from the group is Indonesia, which historically has been quite dependent on external funding. We think that Bank Indonesia's bond purchases, in recent times, have likely provided a strong anchor for Indonesia rates. As a result, Indonesia rates have become less sensitive to external risks, compared to pre-COVID (see IDR Rates: “Burden-sharing” a positive for IndoGB).

Through this report, we have demonstrated that the PCA technique can be used to break down and gain insights on the different drivers of Asia interest rates, in an objective and quantifiable manner. We aim to repeat this exercise on a quarterly basis to spot changes in regional trends/dynamics and track the relative importance of drivers across different time periods. In addition, short-term models can be built to spot instances where Asia rates have over or undershot key drivers.