How large is the risk that the ongoing economic slowdown in China will be compounded substantially by credit market distress and associated contagion? We take stock.
Taimur Baig, Chua Han Teng20 Sep 2021

How large is the risk that the ongoing economic slowdown in China will be compounded substantially by credit market distress and associated contagion? In this section, we lay out some of the key considerations.

Financial difficulties of Evergrande, the most indebted property developer in the world, pose significant downside risks to the broader economy. Concern over Evergrande’s ability to make good on USD300bn of liabilities has built up sharply since June, with its credit trading at distress levels. Immediate concerns go beyond the potential loss faced by direct holders of Evergrande’s debt; people who have made deposits for homes are at risk of not getting their homes built or getting their money back. There is substantial risk of social unrest spreading if that were to transpire.

Evergrande employs 200,000 employees, associated suppliers / corporates employ a total of 3.8 million people. Its struggles will also exert downward pressure on property prices; reportedly, Evergrande is offering 28% off for new home sales. Potential default (75% haircut likely for bond holders) may spill over to suppliers. Total debt of Evergrande reached RMB1.97trn, or USD300bn (against RMB2.3trn asset), which is around 2% of China GDP, or 10% of China’s foreign reserves. Although the size of debt is far from that of the 2008 Global Financial Crisis (USD10.5trn mortgage market), the potential repercussions on the economy cannot be underestimated.

The indirect implication is manifold. Stock price and the ability of other real estate firms to raise funds have corrected sharply, prices of Chinese USD denominated high yield bonds have plunged, and a liquidity crunch is on the cards. There are also cross-default fears, as many affected bonds are embedded in wealth-management products. Institutional lenders and investors, local and foreign, are also at risk of facing contagion. 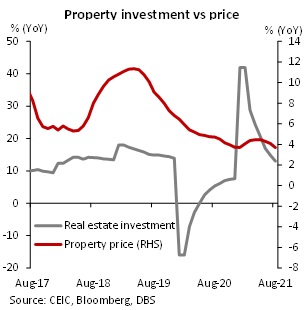 Authorities won’t sit on the sidelines. The People’s Bank of China injected USD14bn of short-term cash into the financial system on Friday to soothe nerves, more of which is coming, we’re sure. Among other actions, local governments will continue to speed up bond issuance to fund infrastructure projects. Real estate companies with relatively healthier balance sheets may also be asked to take some of the unfinished projects of Evergrande. The authorities will likely cut the RRR by another 50bps before the end of this year to prevent liquidity squeeze. 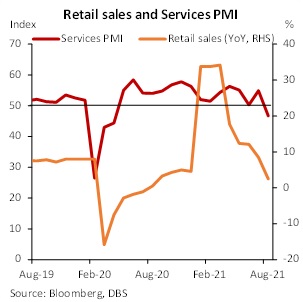 Economic activities continued to decelerate in August due to Delta variant outbreaks. The retail sector clearly suffered the most, which plunged to 2.5% YoY in August from 8.5% in July. The trend corresponded to the first ever contraction of services PMI in the past 15 months as well. Although traffic data in major cities recovered somewhat, spending power remained weak. Air traffic was 4.6% below the 2019 level during summer. As a result, CPI and core CPI dropped further from 1.0% and 1.3% to 0.8% and 1.2% respectively. Stock market consolidation will weigh on spending power through negative wealth effect.

On the supply-side, industrial production fell for the fifth consecutive month to 5.3% YoY from 6.4% in Jul. The gradual re-opening of manufacturing plants in advanced economies started dampening China’s export share. Manufacturing PMIs of the US and the EU have stayed around 60 lately, while China’s NBS Export Order PMI contracted for 4 straight months, to merely 46.7 in August. Domestically, production activities will continue to be held back by Delta outbreak. Cargo traffic will remain sluggish on the back of rising shipping costs.

China is ending 3Q on a particularly weak footing, having spent most of the period since the pandemic leading the global economy with a robust rebound. Its ongoing stumbles could weigh in on the global economic momentum as we step into the year’s final quarter.