ASEAN-6: Assessing the impact of oil and geopolitics

We assess the impact of the war in Ukraine on ASEAN-6 in this report.
Group Research, Chua Han Teng, Radhika Rao, Irvin Seah21 Mar 2022

Photo credit: AFP Photo
Below is a summary; for the detailed and full report, please download the PDF

Overview
We assess the impact of the war in Ukraine on ASEAN-6 in this note, through direct i.e., trade with Russia and Ukraine and financial market linkages and indirect, which is mainly via oil, besides other commodity markets. We discuss the regional implications, followed by each of the ASEAN-6 economies.

Direct impact – trade and financial linkages
ASEAN-6’s direct economic impact via the trade channel is contained, in our view. In terms of direct trade, the region’s overall linkages with Russia and Ukraine are limited. ASEAN-6’s average export and import shares with Russia came in at just 0.4% and 0.6% of the total in 2021, respectively, while that with Ukraine was at a negligible 0.1% and 0.2%, respectively. The economic toll on ASEAN’s exports could come instead from a broader European slowdown, should the conflict be prolonged. Total oil import dependency from Russia is largely manageable, in our view. Thailand, the largest net oil importer among ASEAN-6, only bought ~5% of Russian oil in value terms, higher than most regional peers. 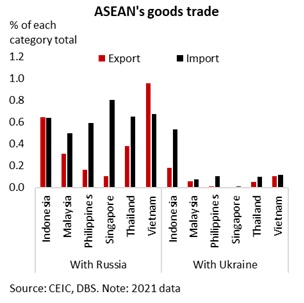 There are, nonetheless, specific commodity dependencies, given Russia’s position as a leading oil producer and exporter, and Ukraine’s outsized role in food grain supply. Russia and Ukraine’s role as major wheat exporters and Ukraine in corn would pressure global supplies, leaving Indonesia and Philippines vulnerable to wheat supply shocks and Vietnam exposed to corn disruptions. Indonesia ran a wheat trade deficit of 0.3% of GDP, with a quarter of its wheat supplies sourced from Ukraine, while Philippines ran a wheat trade deficit of 0.5% of GDP, with the government expanding the pool of suppliers to include India. Vietnam is most reliant on corn imports in the region with a deficit of 0.7% of GDP. Even though Ukraine imports are not significant, it is still susceptible to price disruptions. Apart from these, fertiliser, cooking oil and imported feed, are other segments where selected ASEAN countries are dependent on the warring countries. 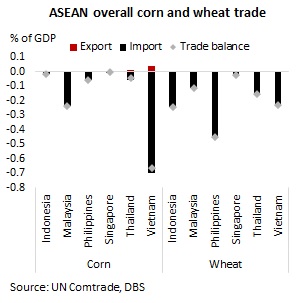 In terms of direct financial exposures, ASEAN-6’s investments in Russia are negligible, based on IMF data on foreign direct investment and portfolio investment. We see little direct financial risks posed by companies halting operations and cutting ties with Russia, as well as from potential Russian default on its sovereign debt.

Russia’s invasion of Ukraine since February 24 however has dented broad investor confidence amid a shift away from risky assets towards safe haven assets such as the US dollar. ASEAN-6 equity and currency markets have since taken a hit, but the correction has been less severe than broad emerging markets (EM) (equities: ~-3%; FX: -2.0%) and varied. Indonesian and Malaysian equities and FX have outperformed ASEAN-6 and EM peers likely due to their relative positive commodity exposures in the region. Performances of Philippines, Singapore, Thailand, Vietnam have been mixed, with equities dropping by -0.5% and currencies depreciating by 1.1% against the US dollar on average.

Three weeks into Russia’s invasion of Ukraine, risk sentiments have stabilised after a tumultuous phase. The shakeout was most palatable in the commodity markets, as oil prices rallied to more than a decade high and have since corrected >20%. Despite the pullback, Brent oil is still ~40% higher than the average price in 2021. We discuss the oil dependencies and impact on three grounds.

Firstly, all ASEAN-6 countries import oil, with Thailand in the forefront as the largest net oil importer (as % of GDP). Singapore and Malaysia are also sizeable importers, but are offset by significant exports, which help narrow the trade shortfall (Malaysia runs a net surplus). The remaining three, Indonesia, Philippines, and Vietnam are middle of the pack being net oil importers to the tune of -1% to -2% of GDP. 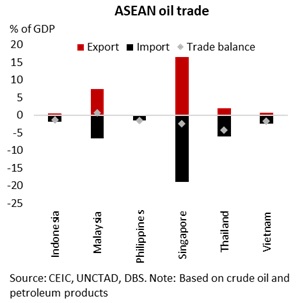 Next is the terms of trade (TOT) impact. We calculate the sensitivity based on an assumption of oil prices averaging US$100/bbl this year, vs 2021’s average of US$70.9/bbl. Spillovers from oil differ between countries and buffered for those that run a strong current account surplus. Our analysis shows that the oil driven TOT spillover is the highest in Thailand and Singapore, and least for Malaysia amongst the ASEAN-6 countries. 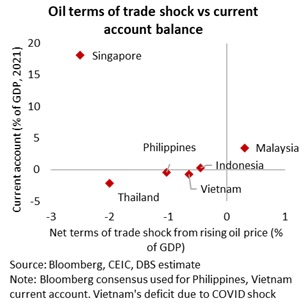 Amongst these, Singapore and Malaysia enjoy a considerable current account cushion due to either higher oil exports or reliance on other non-oil commodity groups. Indonesia also posted a current account surplus in 2021, as its position as a net oil importer was negated by a comfortable trade surplus on other commodity groups like edible oils, coal, and metals, as these rallied alongside oil and also due to sector-specific supply-idiosyncratic forces.

Lastly, is the impact of high oil prices on inflation. Weights of energy-related components in the inflation basket of 8-14% amongst the ASEAN-6 countries, with the spillover from high international oil prices on to domestic pump prices, public transportation and utility bills is a function of price controls and subsidies provided by the respective governments. Inflation is at most risk in the Philippines, Singapore, and Thailand, whilst countries like Indonesia and Malaysia have kept prices of commonly used variants of pump fuel unchanged since the start of the pandemic. Non-subsidised prices are being incrementally raised. With the fiscal strain likely to rise on such price intervention and subsidies, we expect persistently high oil prices to convince policymakers to pass on part of the increase on to the private sector. Besides cost-push pressures from oil, supply shortages and high food costs from cooking oil to wheat has also begun to lift inflation in the region (we discuss this in country specific notes), prompting us to revise up inflation in multiple economies.
For policy, a build-up in cost-push pressures from rising oil and food muddle plans to maintain a growth-supportive stance. Nonetheless, with economies still in the process of post-pandemic reopening and output gaps expected to narrow gradually, regional central banks are likely to lag the US Federal Reserve in the scale and speed of rate hikes – we discussed our PCA-driven approach to segregate inflation triggers in ASEAN-5: Evaluating key inflation drivers.

In the PDF, we discuss each of the ASEAN-6 countries.