Philippines: A laggard in the pandemic recovery

The Philippine economy contracted by minus 1.3% QoQ in 2Q21, reflecting the impact of virus curbs. We cut our 2021 GDP forecast to 4.2% on a challenging domestic demand outlook.
Chua Han Teng, Cfa10 Aug 2021

GDP remains deep in the hole amid sequential slowdown

The Philippines economy fell on a sequential basis by -1.3% QoQ seasonally adjusted (sa), remaining well below pre-COVID levels (-9.7%) as of 2Q21. Even though real GDP registered its first YoY growth since the start of the pandemic at 11.8% in Q221, the increase mainly reflected favourable base effects, as the economy plunged by -17% YoY in Q220. We expect GDP to return to pre-pandemic levels only in late-2022, a laggard among Southeast Asia peers. 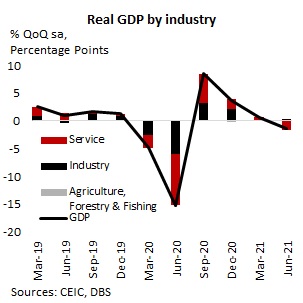 Services continue to bear the brunt of virus restrictions

Within the %QoQ sa growth drivers by industry, services continued to underperform in Q2, contracting by -2.8%. High contact intensive segments suffered from the government’s strict virus containment restrictions. The government placed the National Capital Region (NCR) (accounting for around 32% of the economy) and adjacent areas, under the strictest containment measures – called Enhanced Community Quarantine (ECQ), lasting from March 29 to April 11, 2021. This was followed by a Modified ECQ from April 12 to April 30. The industrial and agriculture sectors meanwhile expanded by 1.1% QoQ and 0.6% QoQ, respectively, in 2Q. 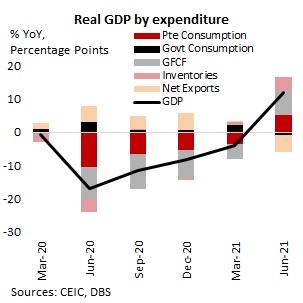 Regarding %YoY growth drivers by expenditure, private consumption and investment were key drivers in 2Q21. Private consumption, which accounts for around 70% of GDP, expanded by 7.2% YoY. Fixed investment added to headline growth, increasing by a strong 37.4% YoY, while inventories also rose. Investments were driven higher by robust increases in durable equipment and construction activity. 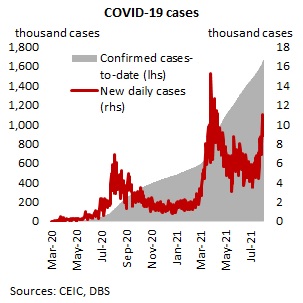 We have lowered our 2021 growth forecast to 4.2% from 6.0%. The emergence of the highly transmissible Delta variant does not bode well for domestic demand, amid tighter movement restrictions. Daily infections have started to rise since late-July, accelerating to a 7-day average of around 9k. To slow the spread of cases, the authorities have imposed a strict ECQ lockdown for the third time in the NCR and surrounding areas from August 6 to August 20. Mobility is likely to drop significantly, similar to April, weighing on domestic demand, particularly private consumption. The authorities estimate that economic losses from the ongoing strict restrictions in the NCR could reach PHP150bn pesos (approximately 0.8% of GDP) a week. Risks that the economy could experience another QoQ contraction in the third quarter are rising. 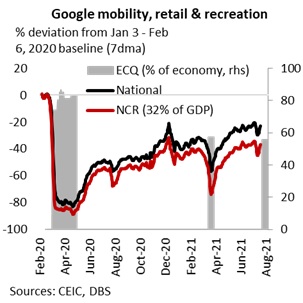 Experiences from other Asian countries suggest that the Delta variant has been more difficult to control. It therefore remains to be seen if the 2-week lockdown would be sufficient to curb the more infectious variant. The population remains highly vulnerable to further infections given the country’s still-low vaccination rate. The Philippines has administered doses equivalent to 11.4% of the population (9.8% of the population has been fully vaccinated), the second lowest among ASEAN-6, just ahead of Vietnam.

We expect the central bank (BSP) to maintain its accommodative monetary policy stance to support growth over the coming months. The BSP’s policy rate is likely to remain at 2% for the rest of the year. The BSP continues to communicate that the accommodative stance will be maintained for as long as necessary to sustain the economic recovery. 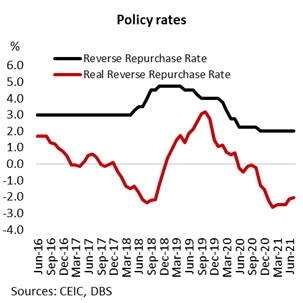 The BSP meanwhile appears comfortable with achieving its price stability mandate. Headline inflation has eased for the third straight month to 4% YoY in July, the upper band of the central bank’s 3 ± 1% target range. The authorities (and us) are expecting a further deceleration in headline inflation. Economic slack would continue to exert downward pressure on prices while supply bottlenecks ease. Real interest rates should remain in negative territory.

Discussions around a cut to the reserve requirement ratio (RRR) have surfaced recently. However, a RRR cut at this juncture appears to be unnecessary, in our view. Our estimates show that banking system liquidity remains ample, due to weak credit demand, amid a highly uncertain economic outlook. BSP Governor Benjamin Diokno said in an interview that cutting the RRR now is ‘untimely and not justified’, as there is ‘still a lot of liquidity in the system’. 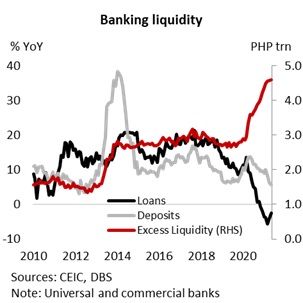 The last time BSP lowered the RRR was in April 2020 by 200bps to 12%, when the economy was under stress from strict virus containment measures. The BSP’s long run goal is to bring the RRR to single digits by 2023 from the current level of 12%, and shift to market-based instruments to manage money supply. In this regard, short-term market interest rates are already more aligned with the policy rate.

To complement fiscal policy, the BSP has also facilitated budget financing through direct advances to the Bureau of the Treasury. The BSP has approved a PHP540bn (around 3% of GDP) loan to the government in mid-July. This marked the fourth round of financing extended by the central bank to the government.