Given the inflationary and rising interest rate environment, Asia’s goods exports, a bellwether for global demand, should be softening by now. As consumers worldwide pay more for food and fuel, some correction in discretionary demand should be unsurprising. Similarly, as interest rates go up across countries, the rising cost of financing should have a dampening impact on consumer and business spending, affecting the demand for goods produced in Asia.
But so far, so good. Our measure of aggregate exports out of the region was up 13.1%yoy through June. The figure is even more promising for Asia ex-China (+20.6%yoy). On a chart, this may come across as a softening trend, but this outturn should be seen in the context of rather adverse base effects. At this time last year, on the back of a post-lockdown rebound, Asia’s exports were up 35%yoy, so a double-digit growth at the current juncture is indicative of sustained strength of the exports cycle. PMI manufacturing has stayed well above 50 lately, another source of comfort. 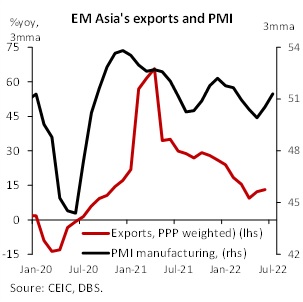 While our region-wide aggregate data extend through June, we already have July data for three key economies, China, India, and South Korea. Exports outturn of the three economies offer useful clues for the rest of the year.
China
China’s domestic economy is facing multiple headwinds, including pandemic management struggles and a deepening property sector crisis, but through all this, the country’s factories have been humming, allowing the exporters to keep their operations going. The cost of shipping a container from Shanghai to Los Angeles has declined by over 40% since Q4 last year, suggesting that some of the supply side frictions related to ports have eased considerably, helping trade. China’s strong exports also reflect resilient demand from its largest importer, the US. With jobs and wages showing continued strength, American consumers have so far shrugged off the challenges posed by high cost of fuel and food, keeping retail sales growth in high single digits. 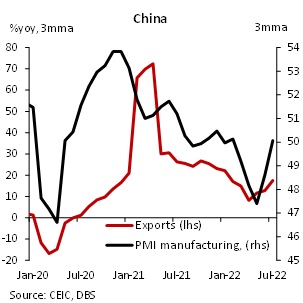 With domestic demand related imports running weak, China’s trade surplus in July crossed USD100bn, the first such occurrence in its history. Much has been made about the July manufacturing PMI falling below 50, but we note that beyond the figure published by the China Federation of Logistics and Purchasing, another manufacturing PMI published by Caixin, which is also widely followed, remains above 50. There is no denying the risks facings China’s domestic economy, but it gives us some comfort to note external demand and exports-related production remain robust.
India
While China is running record trade surpluses, India’s trade deficit keeps widening (July deficit went past USD31bn). Exports demand has softened lately, while the high cost of energy imports has kept the import bill elevated. A recent contraction in the export of refined fuel may be attributed to the government’s levy of windfall tax on oil exports, which is being calibrated and the impact may turn out to be temporary. PMI surveys post a favourable picture,  with manufacturers holding their own despite rising costs and RBI rate hikes. 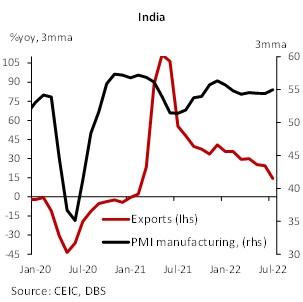 South Korea
On the back of strong demand from both the US and EU, South Korea’s July exports crossed USD60bn, up 9.4%yoy. Auto exports have recovered robustly after last year’s chip-shortage led disruptions. Semiconductor demand, however, has begun to weaken, just as supply has caught up.

Considering that exports were growing by 30%yoy twelve months ago, the outturn is particularly impressive for this export giant. PMI has softened lately, but at 51, still suggests decent expansion. 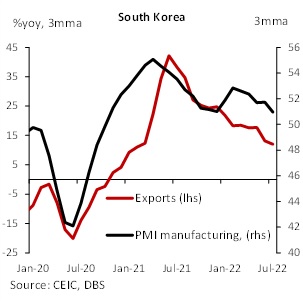 Asia’s exports have therefore begun the second half of the year still in good shape. Chances are the going may get tough as demand in US, EU, and China soften further, but it is heartening to see that export earnings have not yet been hit as much as we had feared given the plethora of outstanding headwinds.