Trucking Along The Innovation Highway

In a few years, driverless trucks could make roads safer, the air cleaner and deliveries cheaper. 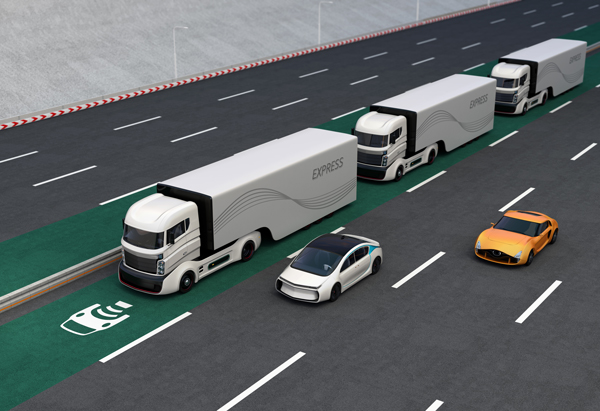 Considered Science Fiction not too long ago, driverless vehicles made their debut in Singapore recently in a commercial trial that will see them act as taxis picking up human passengers in selected parts of the island.

But driverless technology has extended beyond cars, and is being used in goods-carrying trucks - a move that has significant implications for the logistics industry. The development of autonomous trucks has heated up in recent years, with automotive and technology heavyweights throwing their weight behind it.

Otto is developing a US$30,000 kit that can be fitted on any truck manufactured since 2013 to make it autonomous. The kit will enable trucks to handle themselves on the highway by keeping within a lane, maintaining a set speed and slowing or stopping when required. The company says it has demonstrated its technology on two vehicles in California with minimal human intervention.

At the heart of the system is a customised computer that makes real-time driving decisions. “What unlocks the capability of moving with no driver in the driver’s seat is the quality of the algorithms,” says Otto founder Anthony Levandowski.

Despite the excitement over the prospect of this technology, the reality of a fully driverless truck is some way off, say industry players. Daimler, for instance, says that its trucks wont hit the roads till about 2025.

However, there are technologies that are already, or will soon be, available that will are making trucks at least partly autonomous; acting as a smart digital partner to a human driver.

Simpler features are already in use include being able to set a vehicle's speed limit automatically or collision protection cameras that prevent a vehicle from hitting a human. Slightly more sophisticated systems can help trucks stay in the centre of a lane and follow traffic without getting too close.  However, a driver is still required to change lanes.

At the most advanced end of the spectrum is a technology that only requires a driver in the first truck of a convoy, with those following able to be driverless.

Combining several of these technologies will allow for something known as "vehicle platooning", or the ability to line up trucks in a row and automatically brake and accelerate them as one. Demonstrations of this innovation were held recently in U.S. and Europe.

The advancements in driverless truck technology is helping logistics players to promote safer vehicle operation and driver efficiency, as well as boost fuel economy and reduce harm to the environment.

According to an analysis by the U.S. Federal Motor Carrier Safety Administration, the driver was the key factor in 87 percent of big-rig crashes, while more than one-third was due to poor human decisions. Using a computer to help make driving decisions means that drivers can operate vehicles with less rest, and improve safety without sacrificing productivity.

And even as the market waits for the dream of a fully autonomous truck to be realised, new innovations are coming online to further improve the business of delivering goods by road.

"Frankly, there’s never been a more exciting time to be part of the trucking industry. Innovations in vehicle-to-vehicle, vehicle-to-infrastructure and vehicle-to-anything communication will push the envelope beyond even these advances. By improving the flow of traffic, such systems can enable today’s highway infrastructure to be used more efficiently," wrote Charles Chilton is the Director of Engineering at commercial vehicle maker Navistar in technology website Techcrunch.

It's All About Conversion Read More